What Are the Most Dangerous States to Drive In?

Driving down our nation’s highways and byways is an age-old American tradition. For many teenagers, getting a driver’s license is a rite of passage—a first step into the world of adulthood and independence.

However, driving is also a dangerous activity. In 2018, there were over 36,500 fatalities from vehicle crashes in the United States, according to the National Highway Traffic Safety Administration (NHTSA). And each year, more than 3 million people in the U.S. are involved in non-fatally injured in vehicle crashes.

In fact, injuries caused by car crashes are the leading cause of death for people under 45-years-old in the United States.

For decades, car wrecks have been so widespread that most of us remember a few close calls. Motorists across the nation must contend with the risks of driving to work and school everyday.

An estimated 273.6 million vehicles were registered in the United States two years ago, which shows that driving is easily the preferred mode of transportation for most people in the country.

It should come as no surprise that car crashes in the U.S. are not evenly distributed. Statistically speaking, people in some states are at a much higher risk for getting in a car wreck than they are in other states.

By crunching the numbers and digging into the details, we were able to find the most dangerous states in the nation for driving. Learn what they are and things you can do to stay safer on the road.

What are the most dangerous states to drive in?

To find the states where driving is the most dangerous, we turned toward data sourced from the National Safety Council (NSC), which has released injury statistics in the U.S. since 1921.

The most current data on file is from 2018. The NCS measures traffic deaths in three ways—by population, motor vehicles and vehicle miles.

To give readers the best idea of which states have the most car accident deaths, we took the time to look at all three measurements and where the states rank in each category.

The first way NSC measures traffic deaths is by state population. Above are the three states with the highest rate of traffic deaths per 100,000 residents.

How can I protect myself when driving?

When taking the car for a spin, there are a few proven methods for making sure the trip is as safe as possible. Remember that common sense should always be the first line of defense when practicing safe driving.

Wearing a seatbelt is easy to forget, but it could also be a lifesaver in an accident. In 2017, seatbelts saved the lives of an estimated 14,955 passenger vehicle occupants aged five and older, according to NHTSA. Although they might not be comfortable, seatbelts are vitally important for safety.

Most motor vehicles used for personal driving come with blind spots where other cars cannot be seen easily without turning to look. When merging into a new lane, always check the blind spot, because even the most careful of us can make a mistake after a long day on the road.

Modern automobiles come with a range of safety features to protect drivers and their passengers. To ensure a car’s safety features to work correctly, the car must be serviced regularly by a trusted mechanic. The NHTSA estimates that frontal airbags saved the lives of 2,790 occupants aged 13 and older in 2017.

The most important thing you can do for your safety is to be aware of your surroundings. Never drive under the influence, avoid driving if you’re particularly tired, don’t use your phone for texting or calling and try to limit distractions like the radio or interacting with people in your car in ways that could take your mind off the road.

Driving is virtually unavoidable in much of the U.S., but it is also one of the most dangerous parts of the day for the countless Americans who drive to school and work.

Having a car accident isn’t something that anyone likes to think about, but taking the necessary steps for road safety is non-negotiable, especially when driving with loved ones.

Whether you live in one of the states mentioned above—Mississippi, South Carolina, New Mexico, Alaska, Arizona, Kentucky and Louisiana—or somewhere else, remember that taking extra precautions and practicing defensive driving could end up saving lives.

Sticking with our tips on safe driving is a solid place to start. Anyone looking for more resources should check out the NHTSA’s advice on road safety for helpful topics like child safety and teen driving.

America’s roads are the arteries that connect our nation. As the number of licensed drivers continues to grow, hopefully we can all learn to drive a little safer. 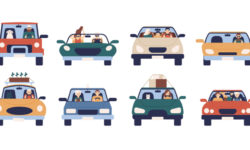 Teen driver safety guide: Getting on the road

The True Cost of Car Ownership

Want to save $275… Read Next Collision insurance